Walking the walk...with one scholarship winner at a time. 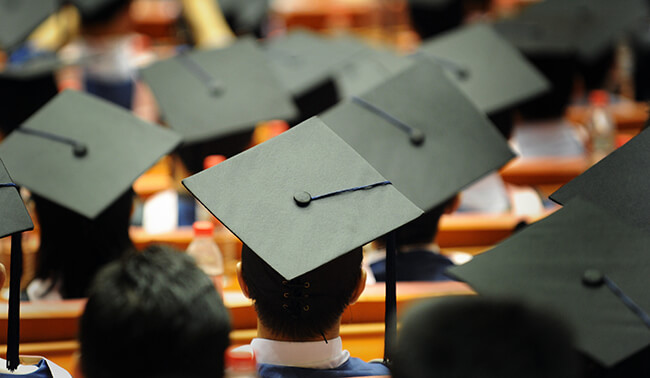 As you may expect, over the last 25 years we’ve become pretty acute (and astute) observers of the credit union movement in general and of credit unions with which we have had and still do have relationships, specifically.

We are a group of folks who believe strongly in giving back, so we appreciate and applaud credit unions that don’t just espouse the "People helping people" philosophy of the movement, but that actually live it. Our longest continuous client (15 years now), Bronco FCU based in rural Southeastern Virginia, is one shining example.

If you’ve been around this long, you’ll remember vividly the chaos, stress, uncertainty and near panic of the late 2008 (and forward) economic crisis and mortgage meltdown. Of course, virtually every credit union suffered to some extent. But Bronco suffered the proverbial double whammy. In the fall of 2009 the area’s largest employer, International Paper, closed its mill in Franklin, laying off over 1,200 employees—most of whom were long-time Bronco members...with mortgages and other loans outstanding at the credit union. The credit union has managed this daunting challenge over these last years, making some extremely tough decisions along the way.

Remarkably, through it all Bronco’s commitment to their scholarship program has been unwavering. And, it’s one of the most aggressive programs we’ve seen.

Focused and fixed on the future

Typically, scholarships have reached at least $20,000 per year. And they’ve actually awarded $23,000 to ten deserving high school seniors in each of the past several years.

Awards range in size from two $5,000 John Alan Glasgow Scholarships (in honor of a retired staff member’s son who died tragically in a car accident when he himself was a teenager back in 2000), to two $3,000 awards (the Charles A. Wrenn Scholarship honoring their long-time Board Chair who passed away in 2018) and the James C. Copeland Scholarship honoring this long-serving Board Member, to the $2,000 Robert T. Petty Scholarship (in honor of the credit union’s former CEO who passed away from cancer in 2017) to multiple $1,000 Bronco FCU Scholarships. As you can see, their scholarships are meaningful in two ways—they provide much-needed financial assistance to high school members going on to college, and they commemorate individuals who have been a part of the credit union’s history.

So, while Bronco has had quite the challenge navigating these past 11 years, their focus has remained fixed on the future and on the role they can and do play in shaping the futures of some of their best and brightest high school members. Kudos, Bronco. You walk the walk like the champions you are.